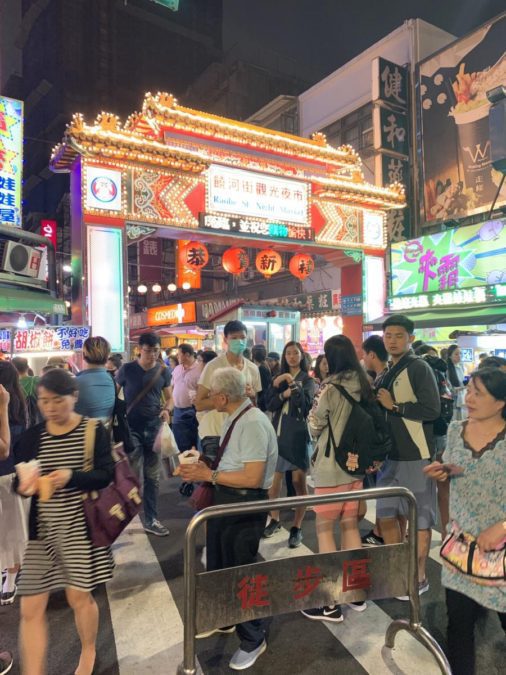 Street food in Taipei is something the locals are very proud of. Many of the dishes mish-mash with other familiar dishes such as the cheese potato and tofu pancake below. But there are some other local elicacies too like the duck tongues on a stick and stinky tofu.

Because I have a slightly different palette as a chef, I didn’t try any of that stuff. It sounds awful and I’m not risking a street vomit just to try it. I’ll take the local’s word that it’s delicious.

Chef Kim from Nomad Bistro in Da’an Taipei told me about these delicious black pepper pork buns. If I wasn’t such a dumpling fiend, I would honestly say these are the best things I ate while in Taiwan. To try them for yourself, head to Raohe night market, and you will see the massive queue as soon as you enter.

Don’t stress as it moves fast. The buns are $55 each. Pay and take your bun and move out of the way fast, at least you don’t get yelled at by the staff who are trying to churn through the queue.

You can see the buns being made as you wait, each one stuffed with delicious filling before being slapped to the side of something similar to a tandoori oven. Each oven can hold 50 delicious Black pepper pork buns. In Chinese, they are called “Hu Jiao Bing”.  胡椒餅

Hands down, solid 5/5.  I would consider jumping on a plane just to pop up there and grab one, there were that good!! Easily my favourite Taipei street food.

This dish is hardly a culinary breakthrough but I assumed it was delicious. There was almost always a queue of hungry Taiwanese, so for that reason, I gave it a go.

It honestly makes me question the palette of the locals, because it was essentially a cooked potato with fake plastic melted cheese and corn. It looked like that, and it tasted just like that.

A solid 2/5 only because there was nothing groundbreaking there for me, and I have no idea why everyone seemed to love the dish so much. Taipei street food fail.

Don’t you just hate it when that happens?!

Apparently, this is a breakfast staple for local Taiwanese. We purchased these in some food markets near 101 buildings in Taipei. They were $30 each and many people came past on scooters first thing that morning buying them by the bag load.

Many people will do this, and then freeze them to eat at a later date. I guess it saves having to come by every morning just to eat. I guess Americans have the same sort of thing with a hot pocket?

The texture was actually really good, and while the taste was a bit bland, it was one of the nicest ways I have eaten tofu in a long time. And for breakfast food, yes, I could quite happily eat these every morning. 3.5/5

Taiwan is famous for its soup dumplings and its braised beef noodle soup. And rightly so on both accounts.

The beef noodle broth, when made correctly, is thick and delicious, with just the right amount of spices. The noodles are long and thicker to help keep some of the flavours. And the beef should be so soft it just falls away from any bones that are still attached.

I tried making this dish at a cooking class in Taipei and it cme out great. I also ate it several times as I wandered around the city.

It was hit and miss if it was going to be a good version or not. On a whole, the dish is really nice, up there as something I’d happily eat every day for a little while, but I wouldn’t fly back to Taiwan just to eat it again, so, 4/5

Bubble tea is known around the world now and has various stores popping up on the streets everywhere. No longer is it just Taipei street food.

Boba Tea is made with tapioca balls, copious amounts of sugar and milk. You can all kinds of flavours, such as Caramel, Brown Sugar and Green tea to fruity versions with strawberry, lime or honeydew melon.

I honestly prefer the plain version. I know, I’m a bit boring like that. What’s your favourite flavour?