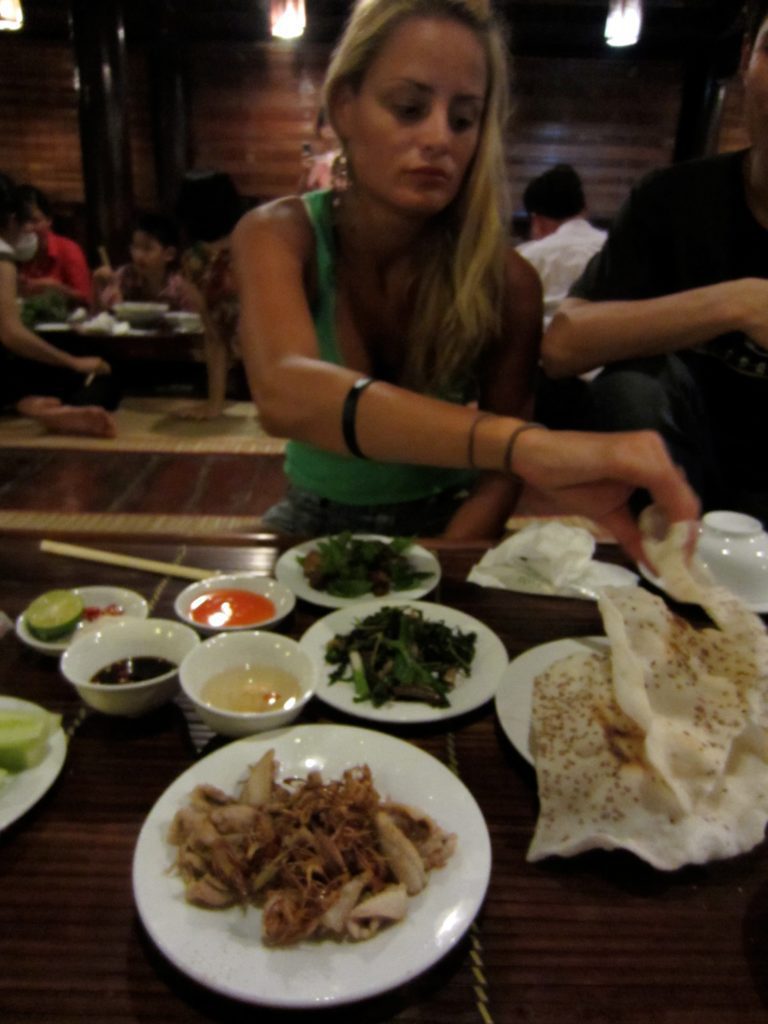 Rachel spent the better part of the afternoon trying to convince Barry to go to a village called La Mat for dinner. Their local speciality? Snake.  Grass snakes, Cobras, Snake liquor, if it is made of snake, they serve it.

Around 7 pm we jumped in a taxi bound for a snake eating feast. There were 3 restaurants to choose from, all offering the same dishes and all with a cage of snakes kept outside. We chose the cheapest one, offering us a grass snake for 500,000 dong ( £14), they also had the best looking restaurant and spoke English, so it was a no brainer.

The guys pulled a grass snake out of the cage with a hook and held it by the neck for us to see while another guy held its tail. With one swift action, he slit down the snake and pulled out its heart, still beating, and placed it in a saucer. The gall bladder came next and finally, the poor snake’s head was chopped off, its body cleaned and it was sent off to the kitchen for cooking.

I got the feeling they treated the snake with respect, there was no mucking around once it was taken from the cage, and the snake was killed as quickly as possible. Which, while it was slightly disturbing, was also a comfort.

so many snake dishes, so little time…

We walked up the stairs to the restaurant part and sat at the table, within minutes the dishes started to arrive. The heart and gall bladder came first along with a shot of blood and whiskey. Barry promised to drink his first if I had the heart. To make it all taste a little better we were served salt and lime with them, so we shot them just as you would a tequila, only Rachel had the still beating snakes heart in hers! The bloodshot was fine, but the bile had a terrible aftertaste, really acidic. It is considered ‘medicine’ in these parts.

The dishes served up were: fried snakes skin (very tough, not really edible), mini spring rolls with snake meat (divine!) , snake intestines and morning glory (too chewy, we never finished that one) , a plain dish of fried snake meat (pretty good), a snake soup of ground-up bones (not too bad) and another spring roll type dish with seaweed wrapping ( nice) we also had plain rice, dipping sauces, cucumber and a really tasty pappadum style bread.
we ate almost everything that was served up, much to the delight of the staff.