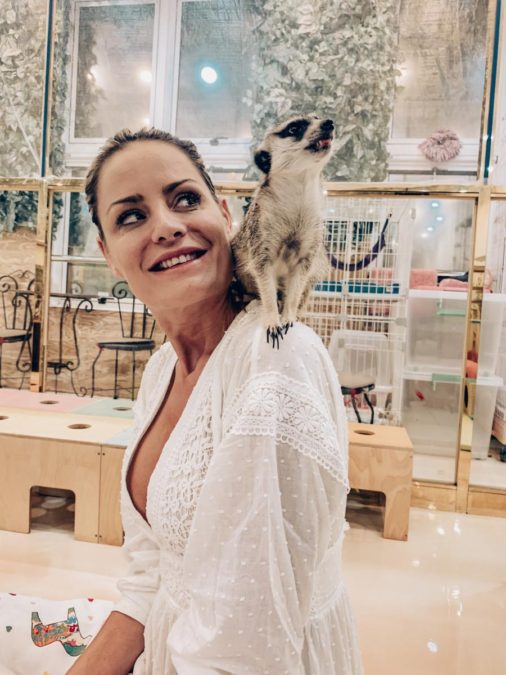 A rather controversial tourist attraction in Seoul is these meerkat cafes that have popped up in MyeongDong and Hongdae recently. I want to show you the truth about visiting a Meerkat cafe in Myeong Dong. Many cities around the world already have various cat and dog cafes, some even specialising in particular breeds of dogs, like the pug cafe in Kyoto, Japan.

In South Korea, they have those kinds of pet cafes too, and I was honestly trying to find the puppy one, because, puppies! And I had the little map that someone gave me on the street and I attempted to follow it, but, somehow got a bit lost. Some helpful Koreans then tried to point me in the right direction. Clearly, they weren’t too sure how to read the map either because they took me in another direction which was to the meerkat cafe.

Once I was there, I just rolled with it, to be honest. Meercats are cute, I used to own a ferret, so I sort of just assumed we would go into a cafe and the meerkats would be in plastic tubes weaving in and out all over the place. Maybe the meerkats would be running down the tubes darting left and right and popping out to another enclosed space with food and water and a running wheel or something, And I would gaze up at them with a coffee in my hand … I had no idea what to expect really.

What is the Meerkat cafe in Myeong Dong?

Turns out meerkat cafe is just a rouse. There is no coffee. You can take in food or drinks, and they don’t sell any food or drinks. There wasn’t even any table and chairs.  Well, a couple, but no one was using them as they would in a normal cafe. Everyone just sat on the floor. Go figure.

Inside the Meerkat cafe in Myeong Dong

The meerkat cafe didn’t even exclusively have meerkats. There was also a wallaby, some hairless cats (I thought that was pretty amusing. Someone thought they were freakish enough to be included with these other exotic animals, but not good enough for the cat cafe around the corner) they have a couple of oati, South American animals. There were also a Genet and a raccoon

The meerkats are in their own pen, and guests are only allowed in at certain times. We had to wait about 20 minutes before going in, while the meerkats rested.

Rules for entering the meerkat cafe in Myeong-Dong

The rules were told to us before we entered the meerkat’s space, so they were safe and we didn’t hurt them. Once we sat down inside we put a blanket across our legs to prevent the meerkats from nibbling on our exposed toes and the meerkats were allowed to roam freely.

The staff are strict about making everyone read the rules and understand them before entering the meerkat zone.

There was a trained professional in there at all times, who coaxed them for photos for us with food. At no time were we allowed to pick up the meerkats or pet them. The staff were very good at enforcing the rules and ensuring the animal’s safety come first.

I keep hearing reports that this one is “better” of the two. They seem to be owned by the same people, and I think the animals get shared between both facilities. It seems like the Hongdae cafe gets more visitors currently, therefore has more animals.

Myeong Dong is easier for tourists staying in that area though, either way, you will see meerkats and interact with the other animals.

Animal welfare at the Meerkat cafe in Myeong Dong

This was important because I realise it is akin to visiting a zoo, which as we all know many people are against now. It was great to see the animal’s welfare is taken seriously. And they limited the contact between animals and humans as much as possible. Many of these animals are rescues, such as the raccoon.

The number of people who go into the meerkat enclosure is also restricted, but just in total numbers, but also in the times they go and how long they stay. This is important for the meerkats to have their required downtime. They are normally only active 10 hours a day.

Would I go again?

Honestly, It wasn’t a bad experience. The animals are clearly well looked after and not neglected. There was an element of sadness more so knowing some of the animals such as the Coati normally roam in packs over long distances every day. Being caged up certainly can’t be great for them.

Likewise for the meerkats who like to burrow. I feel like they aren’t living their best in a room with no dirt to dig in. I’ll leave the ultimate decision up to you if you choose to go.

If you are visiting Seoul for a couple of days and are looking for ideas on what else to get up on, check out this post to solve that dilemma. How to see Seoul in two days.

Location of the Meerkat cafe in Myeong Dong