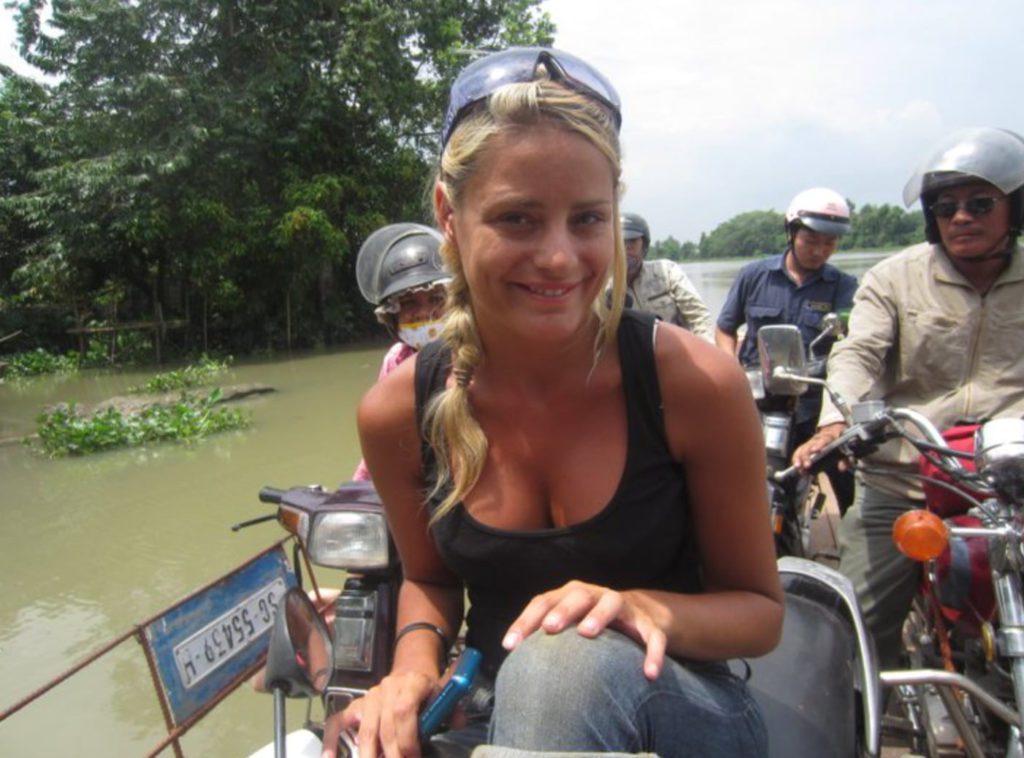 I decided to ride Vietnam on a even though I’d never done anything like that before. The idea of driving several hundred kilometres down a country overrun with bikes like Vietnam was scary, to say the least.

How much was this motorbike adventure going to cost?

First of all, motorbikes are cheap in Vietnam.

I paid $150 USD for 3 days. This included an amazing local guide, basic guesthouse accommodation, a few sightseeing options and the bike. Additional food, petrol and sightseeing were paid for by myself as I travelled.

The tour was private and included a 1hr lesson on the bike.

However, I was so bad during the lesson that they decided I should not ride a proper motorbike for the trip. I was instead given a scooter. A small plastic dinky scooter.

Girls will struggle on a bigger bike without experience on Vietnam’s roads.

Loi, My motorcycle guide in Vietnam

How dare he say an inexperienced girl who hasn’t ridden so much as a bicycle in the past 10 years couldn’t ride a motorbike down gravel roads with traffic whizzing past and indifferent road rules? /s

But of course, he was right. I also didn’t want to throw myself out to the wolves either. I wanted to be on the scooter, driving slow is fine for me.

How skilled do you need to be to travel Vietnam on a motorcycle?

No matter what your skill level on a bike, Vietnam is sure to test you.  As a novice, the twists and turns of a paved road seemed easy at the start. But after a few hours, the city roads gave way to the rural. I was stuck learning to control the 2 wheels on the loose gravel. It is hard and tiring work for a newbie.

You are certain to get the hang of it eventually. You either keep riding or pull over and get the bus. Anyone who has taken that wretched overnight backpacker bus in Vietnam can attest, just stay on the bike.

Also, it’s a much nicer option, with the wind in your hair and the world fleeting by you… Why would you ever step foot in the stinky slow bus again?

The start of the trip…

Day one was about finding my feet, or pedal, so to speak. Learning when to go fast and slow, and when to break. Dodging potholes became second nature and we winded our way up through the jungle villages and headed towards what was once the Viet Cong front line.

The local guide made sure we were having the time of our lives by ensuring we were safe on the roads, but also that we were well fed. Some of the best meals in Vietnam were had on that short road trip.

Being on two wheels, we travelled slower, we took in more of the small towns. In doing so, we were able to stop at local roadside stalls. The food was fresh, local and plentiful.

We slurped down fresh Pho soup made by grandmothers out of their house, munched on mangos picked right from the tree, and dined in beer halls on goat curry with rowdy local men. Every meal told a story.

Learn to cook your own Vietnamese feast with a cooking class in HCMC at the end.

I started getting cocky by day 2 but was quickly pushed out of me within minutes after falling off the bike into the side ditch of the road.

Cow sewerage, old water, oil and food scraps covered me. With no change of clothes and 2 days left of riding, it was sure to make anyone cautious on the road after that. I can still recall the smell… It lingered for days! Vietnam on a motorcycle was never going to be easy!

The third day is about getting amongst it. We were lucky enough to drive up next to cashew nut trees and pepper trees and taste the fresh produce along the way. We stopped by the Dalat waterfall and swung by a coffee plantation to check out the extravagant Kopi Luwak, the world’s most expensive coffee. I didn’t try it. The reason it is so expensive is that it is excreted by the small Asian Palm Civet. Basically, cat poop coffee.

If you want to spend longer in Da Lat, you can! For ideas on how to spend 3 days in Da Lat check out my friend’s post.

By the fourth day, this novice rider was ready for the showdown. Driving into Ho Chi Minh City. With a population of 8.2 million people and 7 million motorbikes and scooters,  this was not play.  A foreign driver here needs wit and understanding to get from A to B in rush hour traffic.

As the monsoon rain crashed down on our bikes, and visors went up, I reflected on the amazing journey I had experienced a few days before.

From having never ridden a scooter, to mastering it in rush hour city traffic. It was eye-opening and made me feel like I had won an Olympic medal for travellers. I mean, here I was, 4 days after ever sitting on a bike, to mastering the 5 pm traffic of Saigon.

How do you master driving in Vietnam cities?

My bike was skidding through 6inches of water as I entered my first roundabout. The roundabout was filled with close to 100 other bikes and scooters all vying for a spot to get to their next destination.

Sure, there was an element of fear, but this was very quickly replaced with sheer awe. I was learning the Vietnamese city road code.

If you have seen the pictures of a chaotic Vietnam, you will probably also understand why I had my heart in my chest. Approaching an intersection was daunting. 6 lanes of traffic into about 10 lanes of motorbikes.

As I came up to the roundabout and flicked my indicator, I was surprised to find the path around me clearing. The other road users were actually giving me the right of way.

No one was yelling, no horns were being tooted. It was a very civilised affair.  It was nowhere near as scary as the guidebooks will have you believe.

This means slower traffic in the city, but it also creates a more placid and forgiving road.

At the start of my Vietnam adventure, I ate grass snake in Hanoi.