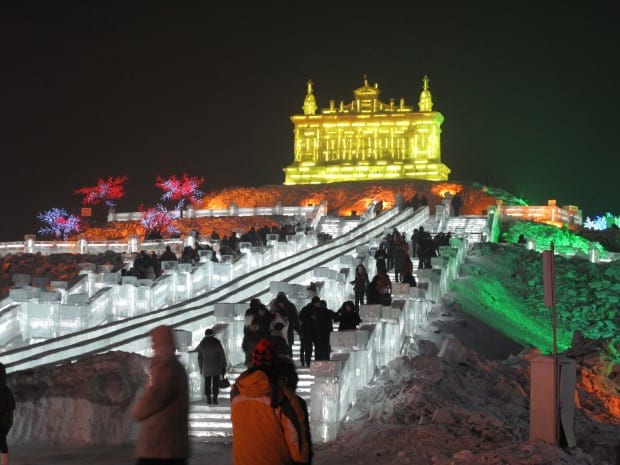 If your planning a trip to China, you need to plan it around their annual Ice Festival held North of pretty-much-everywhere in China. It’s right up under Siberia, so pack your thermals, you will need them!

Harbin’s temperature hovered around -21 degrees Celsius for the week I was there, That’s -6 Fahrenheit for some of you. It was cold. Cold enough that I wore 3 pairs of socks, thermal pants, jeans, boots, 4 shirts and a feather down jacket with a woolen hat and still had to come in doors after just an hour outside. When I say to dress warm, I mean it!

The Ice festival is held every year officially opening January 5th, but there are sculptures going up from December. The main festivities wind down in late February, as the weather, uh, warms. The best time to visit the Harbin Festival is mid to late January. This is when the ice sculptures are looking their best.

Hotels will be booked in advance, mostly with domestic tourists from China, but also a lot of Russians who come to visit due to its proximity to home. Many of the locals will only speak Mandarin, with some learning basic Russian and English. Do not expect everyone to be as quick with English as they are in Shanghai and Beijing. Many of the towns inhabitants work hard over the festival months, with the city almost shutting down in their summer months.

Food, Accommodation and general expenses are higher in Harbin than other chinese cities like Beijing. I believe this is due to the seasonality of the City. Meals and drinks are on par with New Zealand prices, so cheap, but not China cheap, if you know what I mean… Hotels are around $100- $200 a night, not a backpacker destination, but well suited for families and couples.

The festival itself is not just confined to the ticketed park area, but it also spills out into the main streets, with ice carvings plonked in the middle of the cobbled streets. My Favorite was the person peeing as a fountain!

The carvings are elaborate within the park, with the entry fee for the ice festival around $30 usd for foreigners. This allows you access to the park for as long as your limbs can sustain the cold. The worst part is taking your hands out of your pockets to snap pictures, but of course, you can warm yourself up in one of the tents offering hot chocolate for around $8usd a cup!

Within the park you can ice sled, climb some of the exhibits, dog sled, ice skate,ride a camel (?!), if it can be done on ice, or in the snow, it can be done in Harbin!

Visit in the afternoon, this way, you get great pictures during the daytime, when the weather is, ahem, warmer, but you also get to be a bit more snap happy when the sun goes down and the neon lighting gets turned on. It really makes a difference!!

Every year the sculptures and buildings change.. If you get the chance to visit, go for it!!! It’s starting to make waves on the ice and snow sculpture circuit, but it’s still relatively unknown down in Australia.