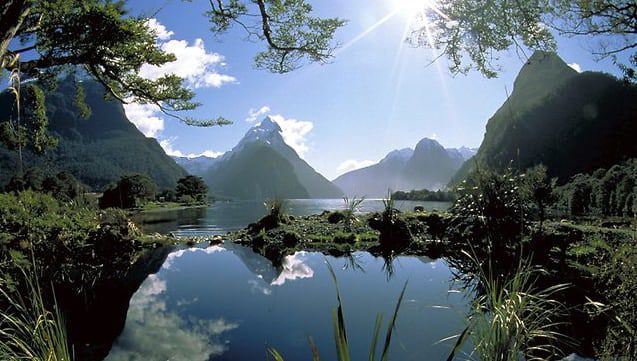 With New Zealand’s Waitangi Day celebrations coming up, I thought I’d let you all know my 10 reasons to travel to New Zealand. It’s such a wonderful country, full of fantastic people, If you agree, please, share this blog!!

The epic highlights of New Zealand list written by a kiwi

1. The beaches in the North Island

Hire a car and drive just a few hours out of Auckland city and you will find yourself with plenty of amazing beach options. Many of these are hidden gems but some are known to many.

If you drive north, you have Mangawhai, Piha and Russell and of course the ever stunning Bay Of Islands beaches.

Heading to the Coromandel you have your pick of New Zealand’s best surf beaches Whangamata, Pauani and Mount Maunganui. There is also aptly named Hot Water Beach (bring a spade and dig yourself a small pool to sit in. The water reaches temperatures of 64 degrees Celsius, so even on a cold day, you can enjoy New Zealand’s beaches!)

Lonely Planet named New Chums Beach as one of the world’s top 10 deserted beaches which is just a short drive North of Hot Water beach.

Shark attacks are rare, Jellyfish are not really a problem, but fishing is plentiful and beaches are clean. You can try your hand at sport fishing for Marlin or dive for Crayfish and Kina. Or, just relax on the beach and watch the waves roll in… bliss!

2. On the highlights of New Zealand list : The Ski Fields of the South Island

Flying into Queenstown will give you a stunning birds-eye view of Queenstown’s drawcard. The snowy mountains are home to world-class ski fields Cadrona, The Remarkables and Coronet Peak.

No matter what skill level you are, the South Island will have a ski field that works for you. I spent a better part of a week getting closely acquainted with the bunny runs of these ski fields. My ass was sore, but the view made up for it, and if anything, It made me want to hone my skills… or at least learn to stand up, so I can come back and carve some serious powder. That’s the right term, isn’t it? 😉

The great thing about NZ’s ski fields is that no one cares if you suck on the slopes. No one laughed at me, and I didn’t feel like I was a hindrance trying to snowboard. The Kiwi way is so relaxed, I certainly didn’t get the same vibe when in other ski resorts. (I’m looking at you Chamonix!)

The pro boarders and skiers have their playground on other parts of the slopes, where there is an abundance of blue and black runs, and heli-skiing? Everyone’s doing it!

3. New Zealanders: They are notoriously laid back and friendly

Especially outside of main cities you will notice you won’t get far without someone having a chat with you. Don’t be alarmed, just bask in that great Kiwi Mateship. You might be surprised when the sales attendant at a local corner store has a chat with you about the weather, or when you pull in to get more gas, and there is a pump attendant there to pump your petrol and engage in conversation on where your travelling to next.

I noticed the difference after coming back to NZ after 10 years overseas- even after living in Australia for some time. The people are just friendlier in New Zealand.

It was also pointed out to me by a UK based driver that New Zealand roads are still full of drivers who wave as thanks or as an apology. It’s not in the road code, but it is undertaken by most Kiwi drivers as a polite wave or a sneaky flash of the car lights as a show of appreciation.

Kiwis do not take themselves too seriously… You may see signs of good old kiwi ingenuity all over the country, from a guy riding a bike through a fast-food drive-through to someone who has  replaced a seat in a car with a cheap plastic deck chair (Not legal or safe, but it’s what happens sometimes!) NZ is full of lifehackers!

4. New Zealand is clean and untouched

There’s a reason Lord of the Rings was filmed throughout the entire country, its unspoiled scenery is jaw-dropping at times (I’ll be the first to admit, after several hours driving through farmland, it does get a bit repetitive!) rubbish is barely something you will see along the roads and the beaches are free of debris.  New Zealanders care about the state and future of their country so you will see plenty of anti-mining signs outside people’s houses.

Drive for half an hour out of any city, and you will come smack bang into an amazing scenic vista. Either rolling farmland, a cliff-faced beach, centuries-old forest, towering alps or steaming hot geysers. The scenery in NZ is varied and breath-taking, especially in the South Island, famed for the sweeping helicopter shots of the Southern Alps.

5. On the highlights of New Zealand list: The food!!!

Fresh fish, oysters, mussels, barbecued snapper, Kina… must I go on? New Zealand’s oceans provide Kiwis with some of the most fantastic seafood on earth.

Speaking of the earth, they do well there too, with nutrient-rich soil providing amazing vegetables and organic produce. If meat is your thing, NZ should be on your travel bucket list too, succulent Lamb and NZ Grass-fed beef.

Life really doesn’t get better than that… wait, It does… to top it off…Marlborough region also happens to produce award-winning Sauvignon blanc wines!! A complete meal, all from the land of the long white cloud.

If you are after something quick and easy, fast food, look no further than New Zealand humble meat pie. The best of them come from a local bakery ( Can I recommend my local, Drury Bakery, best pies in NZ, as voted by me!) Grab a mince and cheese pie for the ultimate kiwi experience, Or dare I say it, head to the nearest Mc Donald’s to munch on a  Kiwi Burger.

Basically, a better quarter pounder with a fried egg and sliced beetroot. A local fish and chip shop will also be able to whip one up, served with one of the creamiest strawberry milkshakes around!

With great Kiwi humour and ingenuity, comes their love for random big monuments! The smaller the town, the bigger the monument. These things are awesome, conceptualised back in the 70s and 80s, and popularised even more so recently for travelling tourists, these beacons of a town’s sheer being are worth a look.

My favourites are the Paeroa L&P bottle, as it was the emblem of summer holidays as a kid, often driving past and stopping for the annual photo. But this year I was also able to finally cast my eyes on the Ohakune Carrot.

I actually drove out of my way to bump noses with it, for the sheer hilarity. After which I stumbled on the Big Apple in Waitomo, The big sheep shearer in Te Kuti.

These big things are made in jest and highlight a town’s most famous attribute, such as the BIg Kiwi Fruit in Te Puke and the big gumboot in Taihape. How many have you visited?

7. Its not a highlights of New Zealand list without, The Haka

It’s known worldwide as New Zealand’s trademark sports showdown before a big game. The part where the hairs on the back of your neck stick up and you feel the air change. The Haka is awe-inspiring to watch and really gets New Zealand pumped.

But to appreciate the Haka, you need to appreciate the background the actions have. The “war cry” is centuries old and seeped in traditions. There are different versions of the Haka, but for overseas visitors, the “Ka Mate” ceremonial haka is most well known.

The All Blacks are probably the most famous sporting team to use the Haka- before every international game. I would imagine a lot of people pay top dollar to see them play, just for the Haka… in a stadium, it really is amazing.

8. Lord of the rings tours

I know, it was just a movie, but seriously, if one thing was to put New Zealand on the world map, Middle Earth was it! After more than 13 years since the first movie came out by Sir Peter Jackson (He’s become a Sir since the first film!) the franchise has made leaps and bounds in the film industry, but also for NZ. Tolkien Tourism is the name coined for people who travel to New Zealand purely to explore the scenery and sets of the LOTR films.

I visited the Matamata film set this year and was the only person in a group of 20 or so people, who had neither read the books nor watched any of the films. Sure, I felt silly playing along looking at hobbit holes and marvelling over the oak tree of Bag End, but, the Hobbiton tour was good fun, and has actually inspired this Kiwi to knuckle down and watch the series!

For a small nation, with not a whole lot of cash injection for its sporting elite, you have to give it to New Zealand. America’s Cup and The All Blacks and two of NZ’s greatest team accomplishments.

Of course, they are also pretty good at individual sports too. Mark Todd and Blyth Tait helped NZ’s medal count in the Olympics in the ’90s for Equestrian, while we had some fantastic watersports competitors with Rob Wadell, Ian Furguson and Paul McDonald… for a small nation, NZ does ok on the world’s stage.

They may not be the richest nation or one with the most people competing, but New Zealand focusses on quality, home-grown kiwi talent achieving their best on the world stage.

NZ has won America’s Cup two times now, but have come in second to the wealthier teams several times… and don’t even get a kiwi started on how many NZ team members made up those overseas-based winning teams!

10. Travel in New Zealand is easy and safe

In fact, you can camp in some of the most scenic places in New Zealand for free! Just pull up your camper ( It must have a bathroom inside to be legal)  and go to sleep, wake up the next morning to a stunning sunrise over the alps, or head down to the beach for a morning swim.

The New Zealand Dollar is generally lower than the Australian dollar by around 15%, and lower than the USD by around 20%. So a month in New Zealand will be cheaper than a month in your home country- once you’re there of course! Clock up those frequent air miles to make the most of free flights, and you can have yourself a holiday in heaven for next to nothing!