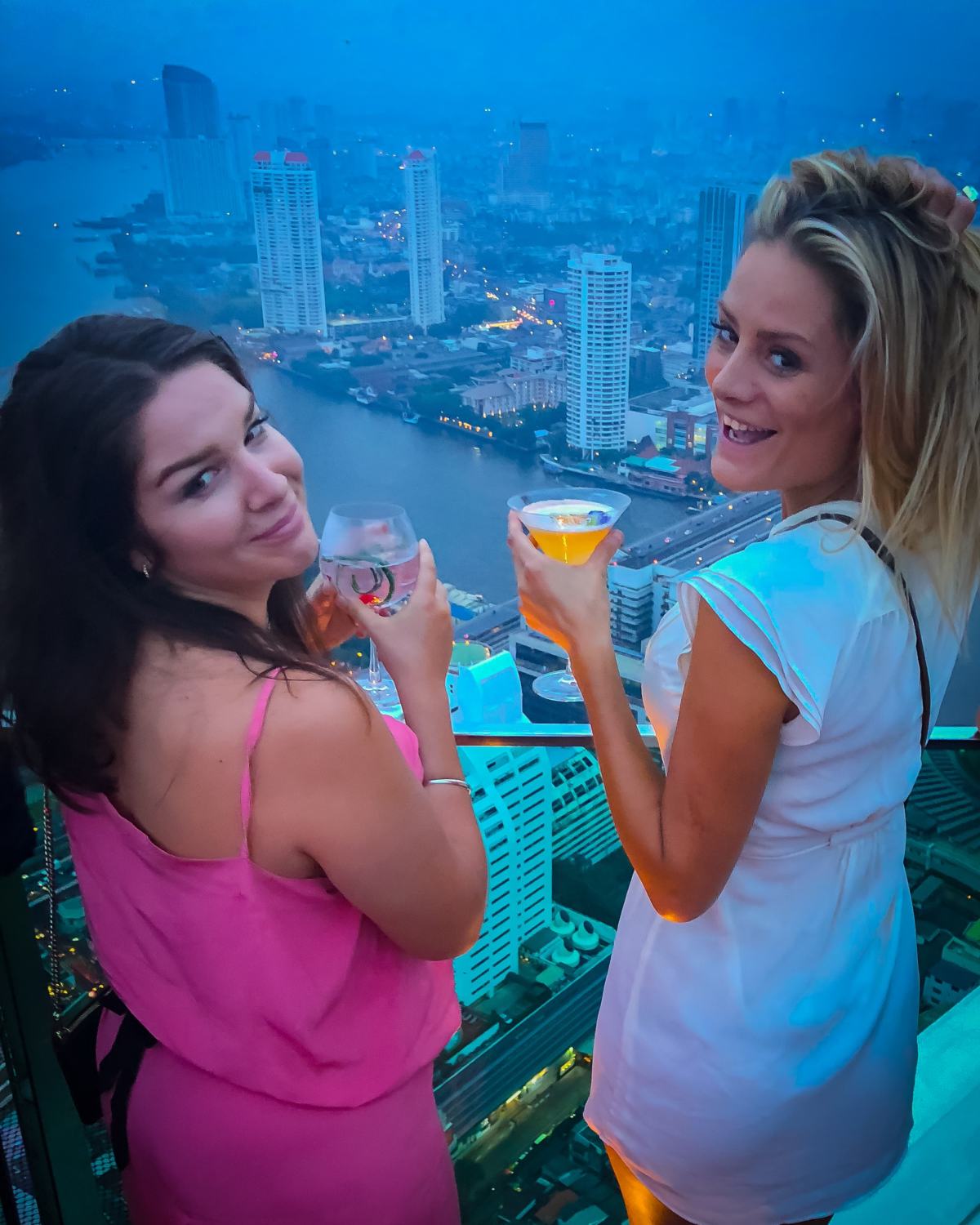 A Bangkok Rooftop bar is synonymous with the city these days as every building seems to tout its rooftop venue as one of the city’s best. Here’s my short and easy list of the three bars I frequent every time I am back in Bangkok with friends.

The Lebua hotel‘s rooftop Skybar became world-famous after “The Hangover” movie based second film in Bangkok. The Lebua Skybar and Sirocco restaurant were both featured in the movie, which catapulted it into popularity with tourists. Skybar is touted as one of the highest bars in the world, standing 820 feet above the city and probably the most famous Bangkok rooftop bar.

The Lebua Skybar offers a stunning array of cocktails to help you watch the sunset over Bangkok’s glistening skyline. Choose from Hangover Too or Nightcap In The Clouds from the Lebua Signature cocktail list. Or sip on the Skybar Hangovertini from the classic list.

The light bites menus has delicious dishes such as

The following is not permitted at Lebua Skybar and Sirocco Restaurant:
– Sandals, flip flop or Birkenstock (Only fully covered shoes for gentlemen)
– Sleeveless T-Shirts for Gentlemen
– Backpacks and Luggage

Above 11 is one of my favourite Bangkok rooftop , not just for the stunning nighttime view over the city, but also for its delicious cocktail list. The setting is gorgeous, with an exciting elevator ride to the top where the doors open out to a whimsical garden maze.

The Peruvian- Japanese inspired menu takes you on a journey from the streets of Lima to the quiet lanes of Kyoto. The Nikkei theme encompasses the food and the cocktails, with dishes such as Pork belly Nikkei chicharron steam bun and Tuna Tataki Tiraditos.

Make sure you try a pisco sour or a sake spritz for the sunset hour before moving on to the rest of the cocktail list.

Check the weekly schedule for the entertainment list. Different DJs play every evening. Expect to hear a Latin twist to the tunes most nights to follow with the bar’s theme.

Staff all speak English with some speaking Thai and others speaking Spanish. It’s also worth noting that many of the kitchen staff are highly trained Peruvian chefs, so you can be sure the food is authentic and delicious.

It sounds crazy, but you will definitely want to check out the bathrooms while you are at Above 11. The view is spectacular!

The following is not permitted at Above Eleven:
– Sandals, flip flop or Birkenstock (Only fully covered shoes for gentlemen)
– Sleeveless T-Shirts for Gentlemen
– Backpacks and Luggage

Reservations are not usually required, but it is a good idea to make a booking on busy Friday and Saturday nights, or in peak season.

It’s not very often a beer bar makes it into a list for rooftop bars. But the massive social push in recent years for craft beer spots around the world has many hotels adding a beer bar to its growing list of bars within. The Radisson Blu Hotel in Bangkok is no different. It gives is crown rooftop space 30 floors up to Brewski.

Brewski has a sizeable beer list, with around 12 beers available on tap. Many are Belgium beers, another beer trend that has swept Bangkok recently.

The draft beers on tap included two Vedetts and two La Chouffs from Belgium. Along with:

The Craft beer list for bottled beers is in excess of 50 different beers from around the world. The list changes frequently, so not all of them as on the printed menu. Ask the staff if you have a particular craft beer in mind, they might just have it.

The food menu is typical pub fare, so if you are craving some spicy fried chicken wings or a juicy burger with a view, you have come to the right place. This is one Bangkok rooftop bar without a stiff dress code, although closed-toe shoes are expected. It’s the perfect place to stop by after you have shopped all day at one of Bangkok’s markets.