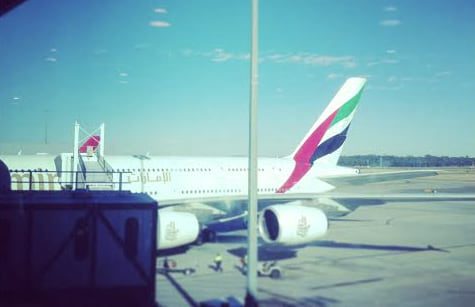 The Emirates flight from Melbourne to Auckland is the A380 daily service from Dubai.
The flight departs at 8:10 am, however, our service was delayed by half an hour (as expected on a Christmas season flight) with the breakfast service. The boarding process was done by zones which speeds up the process, or so the theory goes. We were seated quickly, and I noticed the space within the economy was substantial.

The seat pitch is 32-34 inches and the width is 18 inches. Which is noticeably more roomy than the 777 economy seating. Leg space was great. As a 5’9 tall person, I was able to stretch out and not knock my knees when the seat in front of me reclined. The seatbacks all feature a universal plug along with a USB port. It’s perfect for anyone needing to charge their laptop or phone while travelling. Luggage space also seemed greater, and the design of the overhead compartments meant the cabin felt more airy and spacious.

The only difference? The writing on top of the cake, and the lack of glasses of champagne. Although, given we were on a morning service, a glass of champers was hardly a priority!

Emirates call their entertainment system ICE which stands for information, communication and entertainment. Basically, a do-everything system with more than 14,000 channels of entertainment on demand. Movies on board varied from the current blockbusters through to Bollywood greats me Arabic cinema. This month there was a special feature on Latin American cinema. To keep the kids occupied (and the parents sane!) on a long flight, there is also a dedicated Disney classics channel.

To date, there are 49 movies listed, and 20 odd tv shows just for little ones.
To check what movies are shown on your flight before you travel, visit this link

The table folds in half too, which is perfect for a longer flight where you just need a small ledge to put your water, book, or glasses between meals. It’s the small things…

Children on board were given soft toys or backpacks with an activity pack, depending on their ages. These were given out at the same time as the adults were given the hot wet towel and the breakfast menu.

For breakfast we had two options (for those who didn’t pre-order a special meal such as a gluten intolerant meal or a vegan meal)  a plain omelette or chive scrambled eggs. I opted for the latter. It was standard aeroplane food, but still better than an overpriced sandwich from the terminal cafe.

In terms of space, comfort and service, Emirates tick the boxes. Fares start at around $300 per person one way from Melbourne to Auckland. Less when there is a sale on, more in high season. Sure, prices are about 30% more booking with Emirates, over an airline such as Jetstar. But having a 30kgs checked baggage limit, a comfortable roomy seat with seatback TVs and entertainment, a meal and a glass of wine, it’s worth it.