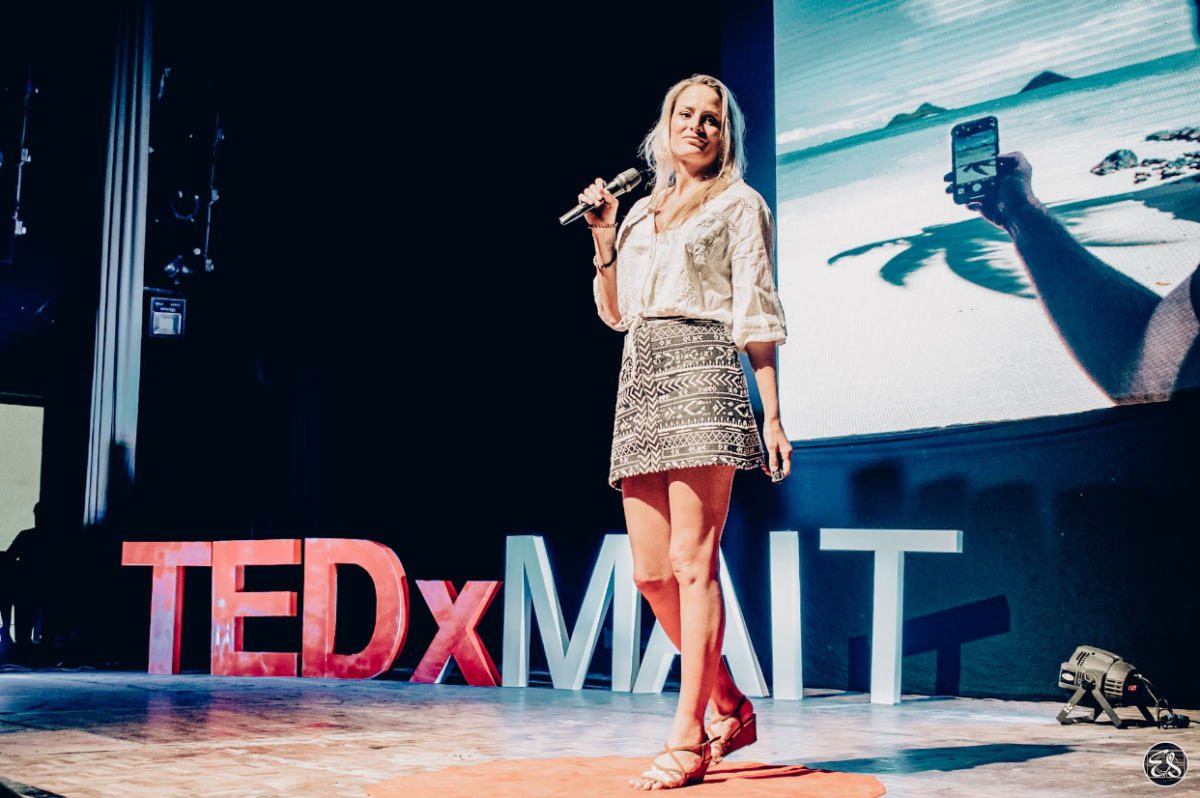 I had never set out to do a Ted Talk. Of course, I listened to them on podcasts, while prepping food for billionaires at work. But I had never considered doing one myself. When I was asked if I would ever like to do a Ted Talk, I laughed.

“What could I possibly offer a room full of people, let alone 20+million subscribers?”

I had never considered that every person’s story is different. Every person’s journey and experiences were different. And I certainly didn’t think my story could add value to anyone’s life.

A Tedx talk was not a thing that I thought was in my realm of possibility.

But, I said yes to something I had absolutely no experience in.

When I say “no experience” I mean it.

The last public talk I had given was about 12 years ago, to a small classroom in Kathmandu where I was volunteer teaching. Speaking in front of 30 or so 7-year-olds was hardly an intimidating situation. But that was about my only experience with “public speaking”.

As much as you might scoff at this, I actually don’t like being the centre of attention. I’ve managed to find ways around it, and somehow make myself look marginally comfortable in social situations. At least on the outside. Inside I’m an absolute mess of thoughts. But anyway, that’s another story…

Back to this Ted Talk and how on earth it all came about. Because this shit was not on my bingo card for 2019. And I had no idea the world was actually about to go to shit.

What the hell am I going to talk about?!

I said yes to speaking at the TEDx Mait in New Delhi, India, but now I had to come up with a subject. It obviously had to be something travel related. And something the audience would give a shit about.

My first draft was somewhat interesting, but it made me sound like an absolute wanker. So in the bin that went.

If you must know, it was going to be a cheesy “follow your dreams” speech about how education doesn’t necessarily play a part in a worldly success. I didn’t even buy into it, so there’s no way I was going to convince a room full of highly educated Indian MIT graduates to believe me either.

Because I like to go against the grain (Believe me, this side of my personality has gotten me in trouble SO many times before!) Eventually, I settled on an opening line of telling people not to travel. I thought controversy might help in getting my message across.

I was going to be that idiot who stood on the world’s stage and proclaimed that everyone should stop travelling.

But it gets worse. This speech was recorded on August 31st 2019. What happened after it aired? Fucking COVID happened. That’s what. I mean, what are the chances?!?!

The world came to a grinding halt and stopped travelling. So I guess, I got my wish?

How easy is it to do a talk?

I mean, it’s pretty easy if you have loads of experience talking to crowds of people. N so easy if you don’t.

I’m in the latter group.

I arrived in New Delhi, India a week before the Ted Talk was due to happen. This was to allow me time to sightsee and eat my way around the city, oh yeah, and practise my Tedx talk.

Which I mostly did do.

But 2 days out from the main event I changed a bunch of slides. This was to make the speech easier to remember. We aren’t allowed to use cue cards or prompters so the only thing I had to guide my talk was the slides.

Anyways, I changed them a bit and had my TEDx talk nailed. I practised it a few times and didn’t miss a beat once. I drove down to the Taj Mahal and made my driver listen to me repeat it over and over again. I’m sure he couldn’t wait for me to get out of the car at the end of the trip. Poor guy had to listen to an idiot tourist muttering to herself about how people should stop travelling for the 4-hour journey on repeat. It sounds like my idea of a nightmare too!

After arriving at the Taj Mahal, I then walked around like a massive bell-end taking pictures at the Taj like some sort of Eat Pray Love bimbo. Honestly, I don’t know how I’ve gotten this far.

The day of the TedX talk

So, the day finally arrived and I headed to MAIT where the Tedx speech was due to take place. It’s a technical university to the North of New Delhi, and the Ted Talk was due to happen in their school hall in a few hour’s time.

I met the team who were running the whole production, they were an amazing group of very talented students from MAIT. I don’t want to start naming names, because for sure, I’ll leave someone out accidentally. But these guys and girls were all legends!

I met the other speakers, who all happened to be from India, but graciously conducted all of their conversations in English for my benefit. To say I was out of my depth here, was an understatement.

One of the speakers was the first Indian to be invited to teach at the Malala Yousafzai All Girls’ School, a school Malala herself started for Syrian refugee girls in Beqaa, Lebanon! Another was a city designer who is poised to revolutionise the future of New Delhi through urban planning. One had invented a medical device that will go on to save hundreds of thousands of lives. Just incredible people doing incredible things!

And here I was, just someone who spends all her money travelling instead of doing anything useful for the greater good, sort of floundering her way through life. But anyway, there I was, among these esteemed speakers about to give a speech that I thought was “a bit ok”.

The Ted Talk itself!

Walking up on stage was nerve-wracking. Not having any notes, or any actual idea on wtf to do was also nerve-wracking. Having the tech side of things completely fail on me was beyond nerve-wracking- it was a disaster. Nothing could have prepared me for what was to come.

So. I’m not pointing fingers at anyone, and no one is the blame, but there was a waterfall of events on the day that made many of the Ted Talks a bit more difficult.

It started with the second speaker, the Clicker didn’t work, and consequently, he was unable to click through his slides at the pace he was speaking and lost his place. (Remember, we weren’t allowed to have cue cards) So there was a bit of faffing while he tried to sort that out. It can be really hard to pick back up when you have a memorised speech and something technical does go wrong.

Oh, and the microphones were constantly stopping. Standard technical problem.

So I took the stage and started my speech. While I thought I was going really well and I was recalling everything perfectly, I looked behind me and saw the slides TOTALLY didn’t match what I was saying. I had to stop the whole thing and start again. There was a slight miscommunication on when I wanted the slides changed. (again, I wasn’t able to use the clicker to do this myself, so I had to sort of “motion” to go to the next slide)

With that out of the way, I continued my speech, albeit showing more nerves than I would have liked because I was thrown with the tech issues.

Being on stage was interesting. I was curious about how I would feel initially. But somehow, once things started happening it was all fine. I actually wish I could do it all over!

Oh no, it doesn’t quite stop there! Getting the video out proved to be one last challenge. Unfortunately, one of the cameras didn’t work/record/whatever?. And instead, we were left with a single batch of footage to use. Oh, also, the camera didn’t work. Yep, the one that would have been the main camera.

Instead were left to scrape together a video with the B camera footage and sound that didn’t quite match up.

I edited it as best as I could with the footage we had. But the final video does lack the professionalism of other Tedx videos. Ah well, win some, lose some.

At a whopping 3500 views, it’s safe to say my Ted Talk didn’t make much of an impact on the world. But thankfully, it’s also not the lowest watched TEDx talk of all time either. Shout out to my friends who watched it on loop and muted, while they did the housework for a few hours to pump up my view count.

But seriously, I had an absolute blast getting out of my comfort zone and giving something a go. I’m pretty sure I’m not destined for a life as a public speaker, and I’m ok with that.

If you ever get the opportunity to do something outrageous like a Tedx talk with no prior speaking experience, I urge you to say yes. Who knows, maybe you will be able to solve world peace, instead of cursing the world with a global pandemic as I might have.